RSS
← Generating Databases from Name to Structure Conversion Software
Depositing data at ChemSpider – what gets deposited? →

Curating data on ChemSpiderâ€¦should it be supported by the community?

ChemSpider has been online since March 24th 2007, about 6 weeks. We opened the ability to curate the data one month later.
Is there a need to curate the data? ChemSpider is built up of a series of databases. The list of contributors continues to increase
and there will be some very exciting announcements made in the next few days about new contributors. One of the largest components is the PubChem database. Peter Murray-RustÂ recently blogged about the quality of the name-structure pairs inside the PubChem database. He used as an example methaneâ€¦ I point you to the original blog for his comments. For my purposes I will use water. Here is the list of names, synonyms and registry numbers posted forÂ Water at PubChem. Certainly a number of these have carried over to ChemSpider. Out of interest it is worth comparing the results of the searches for the word â€œwaterâ€ at both PubChem and ChemSpider. Search Pubchem for water title=”Water on PubChem”>here and ChemSpider for water title=”Water on ChemSPider”>here. 228 hits versus 1. Looking at ChemSpider we get the following list of names, synonyms and registry numbers. The hyperlinks below are those links to wikipedia.

NOT what I would call a quality set of names. These will be curated, some will be done with appropriate robots and some manually.
This is an extreme. Letâ€™s look at other examples already identified by curators. Below is an example of curation in process. 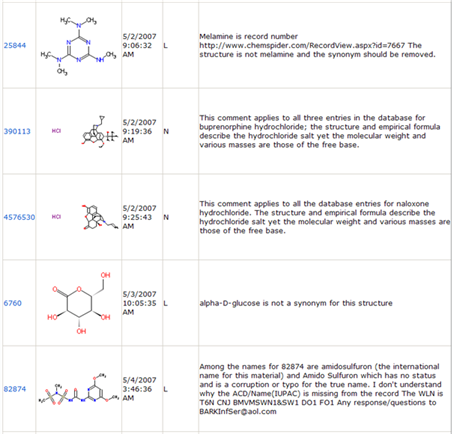 Returning to Peterâ€™s blogâ€¦an excerpt states â€œPubchem faithfully reflects the broken nature of chemical infomation. It cannot mend
it – there are only ca. 20 people – and anyway the commercial chemical information world prefers to work with a broken system. But
could social computing change it? Like Wikipedia has? [..] I think chemistry is different. And I think we could do it almost effortlessly
– rather like the Internet Movie Database. Here every participant can vote for popularity or tomatos. A greasemonkey-like system could allow us to flag â€œunuseful namesâ€ or to vote for the preferred names and structures. And this doesnâ€™t have to be done on PubChem – it could be a standoff site [..].â€ I happen to agree. I believe social computing can change it. That is the purpose of the curating process on ChemSpider. When we set up the system we were not sure that people would care or help in curating the data. Why? Hereâ€™s why people might NOT want to help us curate the data:

All valid questions. And they likely ARE deterrents to people helping improve the quality of data on ChemSpider. So, what are the
answers to these questions.. are they enough to convince ChemSpider users to assist in curating the database? Our responses to the
questions above are as follows:

I have outlined only a small number of possible concerns above. There may be more. I welcome any other questions you may have about our intentions.

Antony (Tony) J. Williams received his BSc in 1985 from the University of Liverpool (UK) and PhD in 1988 from the University of London (UK). His PhD research interests were in studying the effects of high pressure on molecular motions within lubricant related systems using Nuclear Magnetic Resonance. He moved to Ottawa, Canada to work for the National Research Council performing fundamental research on the electron paramagnetic resonance of radicals trapped in single crystals. Following his postdoctoral position he became the NMR Facility Manager for Ottawa University. Tony joined the Eastman Kodak Company in Rochester, New York as their NMR Technology Leader. He led the laboratory to develop quality control across multiple spectroscopy labs and helped establish walk-up laboratories providing NMR, LC-MS and other forms of spectroscopy to hundreds of chemists across multiple sites. This included the delivery of spectroscopic data to the desktop, automated processing and his initial interests in computer-assisted structure elucidation (CASE) systems. He also worked with a team to develop the worlds’ first web-based LIMS system, WIMS, capable of allowing chemical structure searching and spectral display. With his developing cheminformatic skills and passion for data management he left corporate America to join a small start-up company working out of Toronto, Canada. He joined ACD/Labs as their NMR Product Manager and various roles, including Chief Science Officer, during his 10 years with the company. His responsibilities included managing over 50 products at one time prior to developing a product management team, managing sales, marketing, technical support and technical services. ACD/Labs was one of Canada’s Fast 50 Tech Companies, and Forbes Fast 500 companies in 2001. His primary passions during his tenure with ACD/Labs was the continued adoption of web-based technologies and developing automated structure verification and elucidation platforms. While at ACD/Labs he suggested the possibility of developing a public resource for chemists attempting to integrate internet available chemical data. He finally pursued this vision with some close friends as a hobby project in the evenings and the result was the ChemSpider database (www.chemspider.com). Even while running out of a basement on hand built servers the website developed a large community following that eventually culminated in the acquisition of the website by the Royal Society of Chemistry (RSC) based in Cambridge, United Kingdom. Tony joined the organization, together with some of the other ChemSpider team, and became their Vice President of Strategic Development. At RSC he continued to develop cheminformatics tools, specifically ChemSpider, and was the technical lead for the chemistry aspects of the Open PHACTS project (http://www.openphacts.org), a project focused on the delivery of open data, open source and open systems to support the pharmaceutical sciences. He was also the technical lead for the UK National Chemical Database Service (http://cds.rsc.org/) and the RSC lead for the PharmaSea project (http://www.pharma-sea.eu/) attempting to identify novel natural products from the ocean. He left RSC in 2015 to become a Computational Chemist in the National Center of Computational Toxicology at the Environmental Protection Agency where he is bringing his skills to bear working with a team on the delivery of a new software architecture for the management and delivery of data, algorithms and visualization tools. The “Chemistry Dashboard” was released on April 1st, no fooling, at https://comptox.epa.gov, and provides access to over 700,000 chemicals, experimental and predicted properties and a developing link network to support the environmental sciences. Tony remains passionate about computer-assisted structure elucidation and verification approaches and continues to publish in this area. He is also passionate about teaching scientists to benefit from the developing array of social networking tools for scientists and is known as the ChemConnector on the networks. Over the years he has had adjunct roles at a number of institutions and presently enjoys working with scientists at both UNC Chapel Hill and NC State University. He is widely published with over 200 papers and book chapters and was the recipient of the Jim Gray Award for eScience in 2012. In 2016 he was awarded the North Carolina ACS Distinguished Speaker Award.
View all posts by tony »
Leave a comment

← Generating Databases from Name to Structure Conversion Software
Depositing data at ChemSpider – what gets deposited? →

0 Responses to Curating data on ChemSpiderâ€¦should it be supported by the community?