RSS
← The Day I Noticed that CAS SciFinder Now Supports #InChI
#23andme, my genetics, my prostate and my future thanks to the #iPhone →

Yes, that’s quite a title for a blog post. But it covers the nature of exchanges that Egon Willighagen and I have been having recently (that among others as we are co-authoring a book chapter on Computational Toxicology also). Egon asked a question on the Blue Obelisk Discussion group about tautomers and I answered it on this blog. Egon has posted a follow up blog post here. His most recent post makes a series of valid comments…all good and well worth discussing.

“Anyway. Tautomerism was a curation issue in the first(!!!) entry I was curating. The sixth had the more well-known problem, I think. I may be blind, but I would say this drug has a stereocenter: 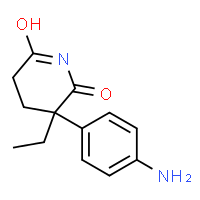 But none of the databases I checked so far (including ChemSpider) defines the stereochemistry! I thought we settled that some decades ago? Stereochemistry of drugs matter. What is going on here?”.

The drug shown is Aminoglutethimide. It’s on Wikipedia here without specific stereochemistry. But as we know Wikipedia does have errors (see slide 47/126 here). So what gives? It’s on KEGG in the same way. Also on ChEMBL here. But it IS on ChemSpider as both stereoforms….R and S. I would suggest that the drug is likely a racemic mixture of the stereoforms and as represented on all of the databases it’s probably okay to not draw the stereobonds as there is only one stereocenter to worry about. Checking Dailymed supports this in this record. A search on “Aminoglutethimide” gives 36000 hits on Google…I did not wade through them! I think the drug is therefore supplied as a racemate, can be separated (see top google hits) but is okay on ChemSpider as is.

Posted by admin on February 9, 2011 in Chemicals and our Health, Community Building, Data Quality

← The Day I Noticed that CAS SciFinder Now Supports #InChI
#23andme, my genetics, my prostate and my future thanks to the #iPhone →